Väsen-Duo, Mikael Marin and Olov Johansson have, after 37 years of interaction and touring, refined their sound and their stage presence to the extent that today they are unique in their kind. With their playful and perfect interplay, they seem to defy the laws of physics in what appears to be a telepathic communication.

The music is intense and full of humour. They create their very own musical language which in its appeal is as modern as it is ancient. With the foundation firmly rooted in the traditional music of Uppland, they have always looked curiously at new musical goals.

Olov & Micke have played together since 1983 when they met at Oktoberstämman in Uppsala and discovered that they had a large common repertoire and a similar way of playing. It turned out that Micke had learned from Ivar Tallroth in Uppsala and Olov had learned from Curt Tallroth in Harbo. They had been introduced to the rich Bohlin / Tallroth tradition by the two brothers. Olov & Micke started playing intensively together and released their first recording, "Det rister i Örat," in 1985. They have played an incredible amount together over the years in Väsen. Now they go on adventures among old fine musicians, stories and trad  tunes and at the same time they continue to break new ground. They perform on a variety of stringed instruments, including a silverbasharpa, oktavharpa, three-rowed Nyckelharpa, violoncello da spalla and a blue electric viola.

Their new album Väsen Duo will be released in July 2021.

Olov Johansson and Mikael Marin started playing together as teenagers around 1980. During the early 1980's they would regularly visit Curt and Ivar Tallroth and Eric Sahlström, older musicians who lived nearby in the Uppland region, where they would play and learn traditional music from them. In this way they became a link in the living tradition that Swedish folk music has enjoyed through the centuries.

In 1989, at a music gathering in Røros, Norway, Olov met Roger Tallroth and asked if he would like to try to jam on nyckelharpa and guitar for a bit. Roger declined, intent at that moment on taking a shower. Fortunately, the shower was occupied, so Roger returned with his guitar, and they played for the rest of the day and far into the night. Among the witnesses to this fateful jam session was Olle Paulsson, who thought it was the best music he had ever heard, and made a promise to start a record label if they were willing to be recorded for a CD (and thus Drone Music was born).

The following summer Olov became World Champion of both the modern chromatic and older historical nyckelharpas at the first-ever Nyckelharpa World Championships at Österbybruk, Sweden. The added momentum for the first CD recording, which was entitled "Olov Johansson: Väsen." Väsen is a Swedish word with many meanings: spirit, noise, a living being, essence among the most prominent. It was originally meant to just be an album title, but soon people were calling to book the band "Väsen" and the name stuck.

The Swedish folk scene immediately embraced Väsen and they got to play a lot on festivals and concert series. They brought a new sound with Nyckelharpa, Viola and Guitar, that attracted a lot of new listeners. The band's popularity gradually grew, along with their international reputation.

In 1994, with two more studio albums under their belt ("Vilda Väsen" on Drone and "Essence" on the French Auvidis/Ethnic label), Väsen were asked to participate on a project of Swedish rock musician Mats Wester called "Nordman," which featured rock music and lyrics but with arrangements and playing by Väsen. The first Nordman CD was a huge hit in Sweden, and the band embarked on two tours and recorded a second Nordman CD, playing in front of audiences of up to 25,000 people. On the first Nordman tour they met drummer André Ferrari and eventually experimented with a drums-and-bass version of Väsen. Ultimately, they settled on André playing hand percussion, and the band officially became a quartet in 1996.

In 1997 the quartet recorded "Världens Väsen" ("Whirled" in North America). Tours of Norway, Denmark, Finland, Italy, France, the United States and Canada followed, as did a Swedish Grammy and two appearances on the national radio program "A Prairie Home Companion" in the U.S. In 1999 the band released their sixth CD, "Gront." 1999 was also the year of the first Nordic Roots Festival in Minneapolis, Minnesota, U.S., an annual event which lasted ten years, of which Väsen was the most frequent featured artist. Their 2000 performance was released on CD as “Live at the Nordic Roots Festival.”

Meanwhile the members of the band were getting older, having babies and facing the challenges of being a musician in the modern age. A widespread U.S. tour in September 2001 had to be scrapped after 9/11. Although the tour was rescheduled for 2002, André's reluctance to tour and economics forced the band to decide to come over as the original trio. The success and pleasure of playing a new set of trio material culminated in two new recordings- “Trio” and “Keyed Up.” Ultimately, it also resulted in a sort of re-birth of the band, although André have joind for specific projects and gigs, especially in Sweden.

In 2004, Väsen were invited to Japan by Yoko Nozaki, their Japanese label (Music Plant) owner. This would be the first of many visits, one of which resulted in a live album (“Live in Japan”) in 2005. Japan is now a regular touring location for the band, along with the United States and much of northern Europe.

2006 brought an invitation to participate in the Carl Linnaeus tricentennial celebrations in Sweden, which became a project that included André and unearthed a surprising amount of music written specifically for the famed botanist. Väsen’s creative arrangements of these old tunes were performed at the celebrations in Uppsala, and recorded as “Linnaeus Väsen.”

Meanwhile, Väsen’s international fanbase continued to grow. The American “new acoustic musicians Mike Marshall and Darol Anger reached out for a collaboration, which resulted in a 2007 album and tour dates, and exposure to a new American audience. And a specific concentration of Väsen fans in Bloomington, Indiana, around the Lotus World Music & Arts Festival, managed to get the city to rename a city street during the festival as “Väsen Street.” This inspired a tune by Olov, which became the title track of their 2009 recording.

Punch Brothers, and American acoustic and “neo-bluegrass” band, recorded a cover of Mikael Marin’s “Flippen” in 2012 for their album “Who’s Feeling Young Now?” and it has become a staple of Punch Brothers’ live set, spreading the word further, globally. As a result, in many parts of the world, “Flippen” is mistaken as a traditional American bluegrass tune!

2013 saw the creation of a new set of mostly original Väsen tunes with the “Mindset” CD. A live performance of much of these tunes, along with some old favorites, was captured on video during the band’s celebratory 25th Anniversary tour at an old movie house in Örsundsbro, Sweden on 24 July, 2014, and subsequently released as a DVD/CD set. Later that year (25 October) the band was honored with a big “25 Jubilee” event in their “home town” of Uppsala, featuring many guest musicians.

When Michael League formed the band Snarky Puppy back in 2004, one of the first tunes the band tried to play together was André Ferrari’s “Shapons Vindaloo.” League’s admiration for Väsen ultimately lead him to invite the band to participate in the second Snarky Puppy Family Dinner in Feburary 2015, along with a host of other musicians including Becca Stevens, David Crosby, and Susana Baca. The resulting performances were recorded and released on audio and video.

2016 became a year of collaborations, from a one-off with the Danish String Quartet at the Savannah Music Festival, to a short tour with the Norwegian classical ensemble Trondheimsolistene (Trondheim Solists), and a more extensive touring project with Lena Willemark and the Norrbotten Big Band in Sweden (and once again, André Ferrari). In between, the trio played gigs in Sweden, Germany, Belgium, the U.S. and Japan.

2017 – 2020 Brewed was released in 2017 and the band continued to tour in Europe, USA and Japan. 2019 Väsen celebrated 30 years as a band and released the album Rule of three. A big concert at Uppsala Konsert & Kongress with many  guests was the highlight of the celebration. The whole concert was filmed and the concert film can still be watched on Vimeo “Väsen 30 Year”.  2020 the corona pandemic hit the world and most tours were cancelled and postponed into the future. Roger Tallroth decided to leave the band for other musical projects. Olov and Mikael continued the creative work and found a new sound for Väsen, decided to resist the pandemic with monthly livestreams that has been very appreciated by so many people all around the world.

2021 Now when things look brighter again Väsen Duo will release their new album and play a number of live concerts in Sweden and Europe during 2021. 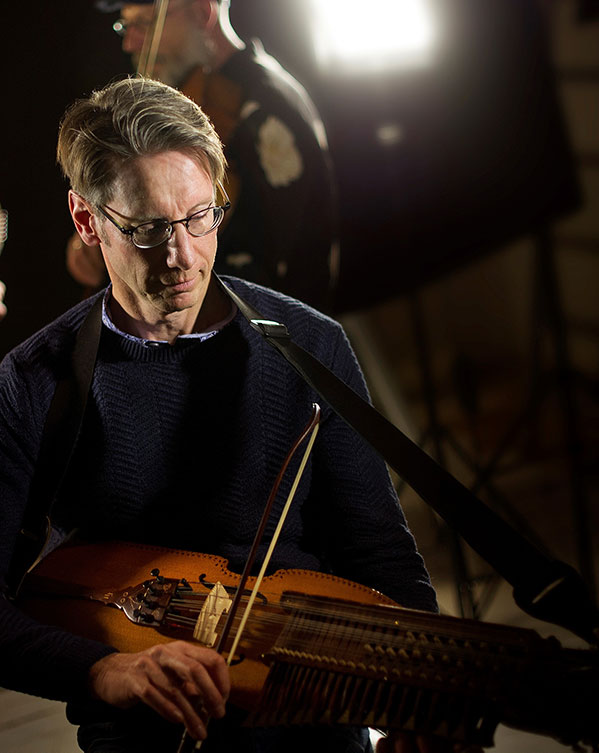 In 1990, Olov became the first world champion of the nyckelharpa. He began to play the nyckelharpa in 1980 as a fourteen-year old, and was named a 'riksspelman' (master musician) in 1984. Olov has studied with the legendary Curt Tallroth and Erik Sahlström. He is regarded as one of Sweden's most prominent nyckelharpa players, and is an inspiration for numerous young performers on the instrument. He is teaching regularly at the Eric Sahlström Institutet in Tobo and at the Royal College of Music in Stockholm.

Apart from his association with Väsen, Olov also plays together with former Väsen member André Ferrari in the duo In Beat Ween Rhythm. He is also playing in MASKIN and together with piano/organ player Anders Bromander. He also have a duo with Scottish harpist Catriona McKay. They have made two recordings together. He has also recorded with groups such as Kronos Quartet, the Nyckelharpa Orchestra, as well as several solo projects.

In 2013 he was rewarded with the Zorn medal in gold. The finest award within Swedish traditional music. 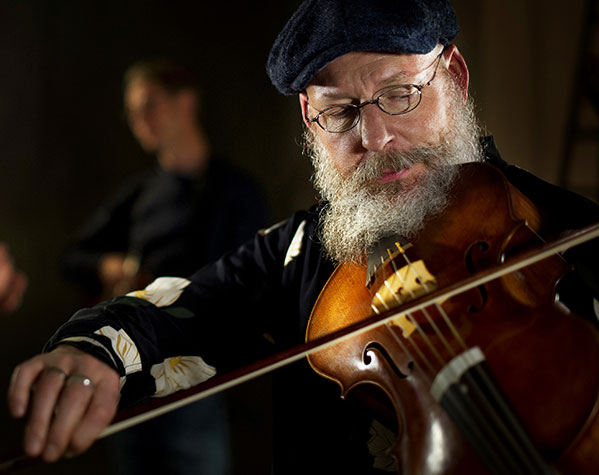 Mikael is a violist who isn't satisfied with merely playing "second fiddle." His influences are literally unlimited in their scope, and oscillate between Schöenberg and the Beatles. He became a national fiddler in 1983, and was chosen to play in a world orchestra under the direction of Leonard Bernstein in 1989.

When not performing with Väsen, he composes, produces, and arranges music for artists such as Mikael Samuelsson, Nordman, and Kronos Quartet. He composed (together with Mats Wester) the opening music to the World Police and Fire Games in Stockholm, 1999.

Mikael can be heard on several recordings, for example Nordman (with Nordman), Barfota (with Mikael Samuelsson), Ånon (with Ånon Egeland, released on NorthSide), and Flow my Tears (with The Forge Players).